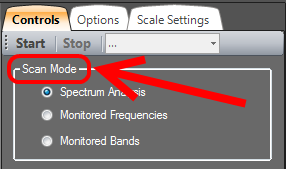 Scan Mode
Touchstone-Pro features three different Scan Modes: Spectrum Analysis, Monitored Frequencies, and Monitored Bands. The Spectrum Analysis charts provide an overall picture of RF energy signals in your environment. As the name suggests, these charts measure all RF energy across a frequency range and chart the signal strength of the frequencies in the range currently being scanned. The Monitored Frequencies and Monitored Bands modes are similar in that they allow you to monitor specific frequencies or bands.  For example, in the setting of a live performance where it is important to monitor the channels that have been assigned to wireless audio devices, the Monitored Frequencies feature can be used to ensure those channels are not being impacted by other sources of RF transmissions. Similarly, in a cell-phone free area, the Monitored Bands feature can be used to monitor the frequency bands used by cell phones for the purpose of detecting prohibited transmissions. 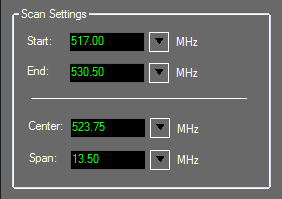 Scan Settings
The Start and End frequencies define the boundaries of the RF spectrum trace when the analyzer is scanning and measuring RF energy across a frequency range. The frequency settings are always specified in units of megahertz (MHz). These can be set directly or, if you prefer, indirectly by setting the Center frequency and the Span. Supported frequencies depend on which analyzer model is currently attached to the PC. 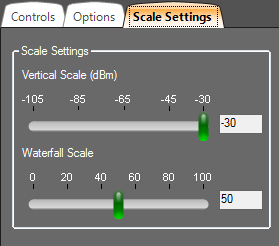 Scale Settings
The Vertical Scale slider controls the height of the Y-axis in the Spectrum Trace view. By default it is set to -30 dBm (the maximum value). If the signal strengths are low then decreasing the Vertical Scale has the effect of “zooming” the trace views. This has no effect on the data acquisition but, rather, simply how the data is displayed. 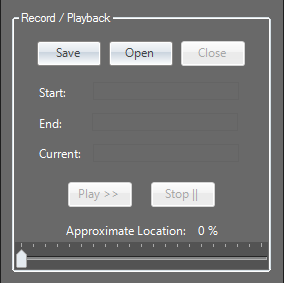 Record And Playback
This feature allows you to record and playback scanning sessions. After recording for the desired time then press the ‘Stop’ scanning button. The Save button is then enabled and is used to save your most recent scanning session to a file. To play a previously recorded scan session, use the Open button to select a saved recording and then press the Play button. 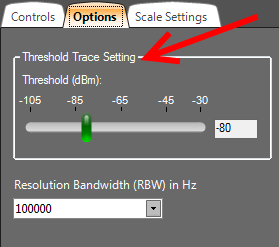 Threshold Trace Setting
This setting is where you specify a threshold value that is applied to the Threshold Trace diagnostic chart. Frequencies whose signal strength exceeds this threshold will be highlighted with a yellow box. 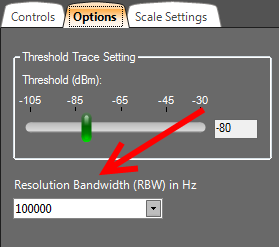 Reports
This feature makes it easy to create a PDF report. Select Create Report from the main menu and you will be prompted for a folder and filename. An Adobe PDF-formatted file will be created that includes all charts. Selecting Open Report allows you to open and view Adobe PDF-formatted reports you’ve previously created (or any other PDF file).

User-Defined Profiles
Two types of profiles — pre-configured (or built-in) and user-defined.  The difference is that user-defined profiles are created by you and stored as files that can later be loaded into the application. Profiles control many parameters, e.g. the Start and End frequencies. When you load a user-defined profile then these settings are immediately applied throughout the application and will be in effect the next time the Start scan button is pressed.

User-defined profiles can not be accessed while the receiver is actively scanning — that is, if the receiver is scanning and you to change the profile then it is necessary to first press the Stop scan button.

To save the current settings as a new, user-defined profile then select File > Save As Profile from the main menu, which will then prompt you to specify a filename and location to save the profile.  The default location is the ‘Profiles’ folder one level below the installation directory, and the default file extension is *.prf (for Profile).  Along with specifying a filename and location you will prompted for a short description for this profile that will appear in the Control Panel’s title bar.

To open a user-defined profile that you had previously created,  select File > Open Profile from the main menu and select the desired profile. The settings stored in the profile will then be immediately applied throughout the application and will be in effect the next time the Start button is pressed.  Also, the application’s title bar will change to reflect the description of the newly applied profile. 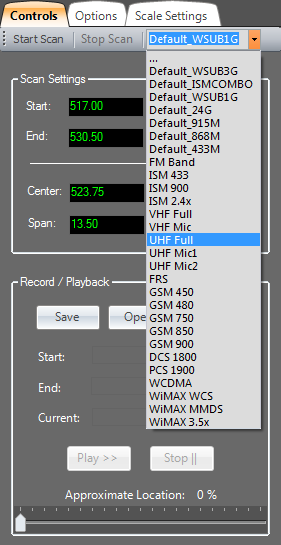 Built-In Profiles
Built-in (or pre-configured) profiles control certain settings, such as the frequency range that is scanned.  When you select one of the built-in profiles from the drop-down list then those settings are immediately applied throughout the application and will be in effect the next time the Start button is pressed.  In general, built-in profiles use default settings and differ only in their Start and End frequencies. Please note that depending on the frequency range supported by your receiver, not all profiles may be applicable.

Built-in profiles can not be accessed while the receiver is actively scanning — that is, if the receiver is scanning and you wish to change the profile then it is necessary to first press the Stop scan button.

IMPORTANT: The file used as a reference trace must have previously been saved using the ‘Export Last Trace’ feature (see below). 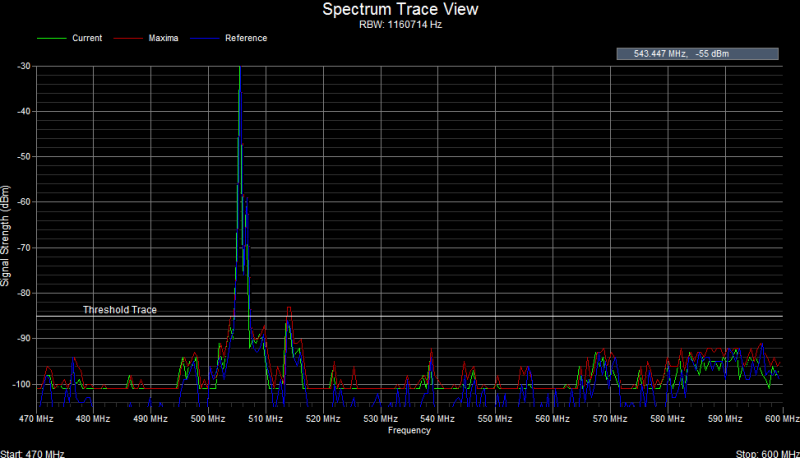 When scanning is active then the reference trace appears in blue and is static — that is, it does not change. 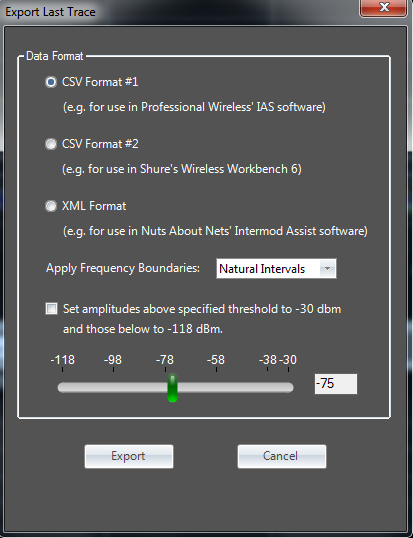 This feature allows you to save a spectrum trace to a file, in XML or CSV format, for use by another program. Several options are available. The first three allow you to select the format (CSV or XML) of the exported file. The fourth option, ‘Apply Frequency Boundaries’, allows you to specify whether the frequencies (and signal strengths) recorded in the trace should be calculated for 25, 50, or 100 KHz intervals, or whether to not round the data at all. Applying frequency boundaries could be of value if you plan to import this data to another application that assumes wireless devices are assigned channels that fall on 25, 50 and 100 KHz boundaries. The fifth option, ‘Set amplitudes above’, allows you to emphasize those frequencies whose signal strength exceeds a threshold. In the resultant file the signal amplitudes will have a value of either -30 (dBm) or -105 (dBm) depending whether the original signal exceeds the threshold you’ve specified. That is, if the original signal exceeds the threshold then it will be recorded as -30 (dBm) in the resultant file and if it does not exceed the threshold then it will be recorded as -105 (dBm). To use this option, select the check box and use the slider control to set a threshold value (in dBm). When you press the ‘Export’ button you will then be prompted for a folder and filename to save the exported spectrum trace data. 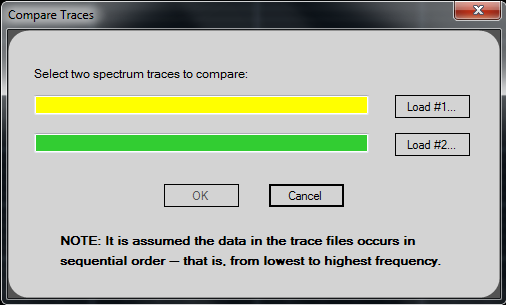 Compare Traces
This feature allows you to compare two traces captured at different times. Use the ‘Load #1’ and ‘Load #2’ buttons to select the two spectrum traces to be compared. Trace #1 is plotted in yellow, and Trace #2 is plotted in green.

IMPORTANT: The trace files to be compared must have previously been saved using the ‘Export Last Trace’ feature (see above).