Waterfall History
A 3-dimensional representation of the RF energy data (i.e. signal transmissions), where the X-axis is the frequency scale, the Y-axis is a time scale, and the “Z-axis” is the color scale. Each horizontal line in the Waterfall chart displays the signal strength (as a color) as a function of frequency as measured over the time period of one scan. That is, with each scan (or sweep) a new row is added at the bottom of the Waterfall chart. The color legend to the right shows that stronger signals will appear red and weaker signals will appear blue. 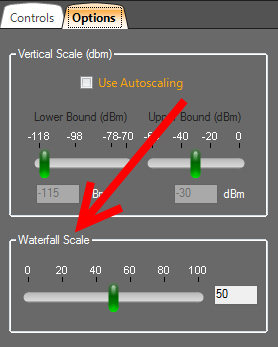