With wireless systems it is very difficult to predict the propagation of radio waves and detect the presence of interfering signals without the use of test equipment. Radio waves don’t travel the same distance in all directions — instead walls, doors, elevator shafts, people, and other obstacles offer varying degrees of attenuation, which cause the Radio Frequency (RF) radiation pattern to be irregular and unpredictable. In order to achieve optimal reliability and throughput for a WiFi (802.11) wireless network it is necessary to detect and identify sources of interference that affect network performance.

A variety of tools are available for detecting and identifying sources of RF interference and which provide information that allows optimal configuration of a WiFi network — they each have their strengths and weaknesses. These include network discovery tools (also known as WiFi scanners), WiFi and RF spectrum analyzers, channel analyzers, and WiFi connection analyzers. The progression from network discovery, to RF spectrum analysis, to channel analysis, and finally to connection analysis provides a natural flow and conceptual path when contemplating how to approach a WiFi problem. The progression breaks what might initially seem like a hopeless problem into smaller, more easily solvable pieces — with the ultimate goal being the application of a quantifiable metric that allows you to optimize the performance of your wireless network and determine the best channel. 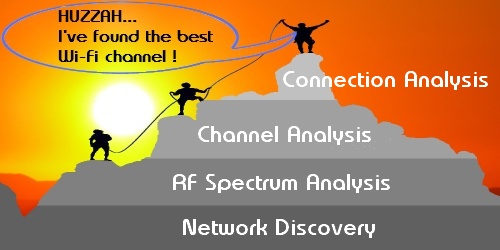 An 802.11 network discovery tool will report the Service Set Identifier (SSID) for each access point (AP) it detects, along with the channel used by the AP. Approximately every 100 mSec an AP transmits a small beacon packet and a discovery tool (running on your laptop and using its 802.11 wireless adapter) detects the beacon and adds the packet information (including the AP’s SSID) to its list of known access points. In addition, the discovery utility may report signal strength (in dBm units) of the beacon as detected by the client adapter. The beacon’s signal strength is an indication of how close the AP is to your current location. Though this is useful information, it does not tell you anything about non-802.11 devices or even how busy the access points are.  That is, your laptop could be sitting next to a microwave oven and the discovery tool would be clueless as to its existence. The discovery tool only knows about beacon packets transmitted by 802.11 devices and can not see non-802.11 transmissions.

An RF spectrum analyzer is the instrument of choice for detecting and identifying sources of RF interference. Spectrum analyzers are a basic tool used for observing radio frequency (RF) signals. Since they detect all RF transmissions (both 802.11 and non-802.11) then they provide a much better picture of the RF environment. This may then help you identify and, perhaps, locate devices that could be interfering with your WiFi network. Typically an RF spectrum analyzer will employ a 2-dimensional display where the vertical axis (Y-axis) represents signal strength and the horizontal axis (X-axis) its corresponding frequency.  If the spectrum trace of the interfering RF transmissions have previously been documented, then it might be possible to determine which type of device is causing the disturbance.  As for tracking-down and attempting to locate an interferer, in practice this is more difficult than it might seem on the surface.  Not only does it require the use of a directional antenna, but in an indoor environment with waves bouncing all over the place (off of objects and walls) then it is particularly difficult to discern from which direction the wave originated.  In other words, when your directional antenna measures a signal from a wave you don’t know whether that’s the original wave or the result of a wave that has bounced off of an object or wall in the room.

Today, one of the hottest topics discussed by WiFi infrastructure manufacturers is “using the infrastructure to troubleshoot the infrastructure”. That is — using 802.11 devices to troubleshoot an 802.11 network.  Channel analysis is a new technique. A channel analyzer uses 802.11 hardware to perform data acquisition — hence, the results truly reflect how RF interference in the local environment affects throughput performance of 802.11 channels.  This is not possible using an RF spectrum analyzer. By virtue of the fact an 802.11 channel analyzer views the RF world through the eyes of an 802.11 device, then the diagnostic information it provides more closely mirrors the performance you can expect from your own 802.11 client adapters. This makes it easier to troubleshoot and fix problems and allows you to make better-informed decisions regarding how best to configure your wireless network and select the best WiFi channel for optimal throughput performance.

Ultimately, the bottom line for any network (wired or wireless) comes down to throughput performance — that is, how many bytes-per-sec can be transferred from one node on the network to another. The dBm and RSSI values that are often referred to in the context of wireless networks don’t mean much if you can’t somehow relate them to a quantifiable performance metric. Before we can really begin to troubleshoot a wireless network we need a way to benchmark its performance, so as modifications are made we can determine whether or not they really make a difference in the network’s performance. A connection analysis tool allows you to directly compare the performance and reliability of different combinations of 802.11 adapters and access points, their locations, antenna orientations, etc.