¹ Invisible Waves is a registered trademark of Kaltman Creations, LLC

Please note the Invisible Waves¹ product developed by Nuts About Nets is no longer licensed to Kaltman Creations nor part of our product line.  However, if you are a current customer you may still download the last version that was released, using the ‘Download’ button below.

A little bit of history about the Invisible Waves¹ product…

In 2008 Nuts About Nets developed a new series of PC-based, RF spectrum analyzers — IW1800 and IW3500 — specifically designed for the professional audio and video industries. At that time these new analyzers were touted as the world’s first, PC-based RF spectrum analyzers which offered automatic charting of open white space (open RF frequency) for use with wireless microphones, in-ear monitors, remote control, security, access control, etc.  The product’s unique features extended beyond the bounds of traditional RF analyzers.  The product was licensed exclusively to Kaltman Creations, who was responsible for its promotion, marketing and sales.  When the license agreement expired in 2010 both companies chose to go in different directions.  The product originally developed by Nuts About Nets is no longer available.  In the spring of 2011 Nuts About Nets released Pro Audio White Space Finder / RF Spectrum Analyzer [Model PAWS4400] — an RF spectrum monitoring solution that is much improved compared to our original IW1800 and IW3500 products.

The original IW1800 product won critical acclaim and received a variety of awards and much recognition.  As an example, the July 2008 "InfoComm Insider" edition lists our IW1800 product as the pick of InfoComm 2008.

Nominated in 2009 for the prestigious Parnelli Award for Indispensable Technology, IW800 continued to receive rave reviews. It was a great honor to be recognized in this way and considered for one of the industry’s highest honors for Live Event Professionals.  IW1800 did win Live Design's 2009 'Best Debuting Product Sound' product award.

A Sampling of Product Reviews:

On the Road with Invisible Waves¹ RF Analyzers…

Invisible Waves¹ on tour with The Killers…

The Invisible Waves¹ model IW1800 is a 100KHz to 1.8GHz, PC-Based RF Spectrum Analyzer. As a PC-based, broad spectrum RF analyzer, the IW1800 touts some unique features that go beyond the bounds of traditional RF analyzers. Though many of these features are well suited for wireless professional audio production and AV integration, the IW1800 is also the perfect tool for general commercial and industrial RF work. Below are a few of the IW1800’s more unique features and functions.

Monitored Frequencies
This feature allows you to monitor any 10 frequencies within the the frequency range supported by your receiver. Furthermore, you can specify an ‘Alert Threshold’ — such that if the signal strength falls below this threshold then the corresponding bar for that frequency turns red (otherwise it appears green). This feature is used to provide priority status monitoring of important transmitters — such as lead vocalists, wireless guitars, etc.

ROI Trace View
The Region-Of-Interest (ROI) view is used to get a closer look at a specific frequency range — analogous to a "zoom" function. It’s perfect for general RF analysis where comparative analysis or the ability to have two sweeps active at the same time is required.

Heat Map
The ‘Heatmap Timecourse’ view is also known as
a "waterfall" graph. It is a 3-dimensional representation of the data, where the X-axis is the frequency scale, the Y-axis is a time scale, and the "Z-axis" is the color scale. Each horizontal line in the Heatmap chart displays the signal strength (as a color) as a function of frequency as measured over the time period of one scan. This feature provides a quick glance back into the sweep history to identify aberrations or fluctuation in signal strength levels.

Control Panel / Scan Settings
Here, the most important parameters are the Start and End frequencies, which are set here. The Start and End frequencies can be set explicitly or implicitly, if you prefer, by setting the Center frequency and the Span. Also, this is where you would specify the resolution of the trace — the choices are from 1 KHz up to 3 MHz. Depending on the type of wireless signal(s) you are looking for this might require some experimentation for optimal results. The control panel is also used to access Built-in and User-Defined profiles — which control most parameters that affect scanning and data acquisition. 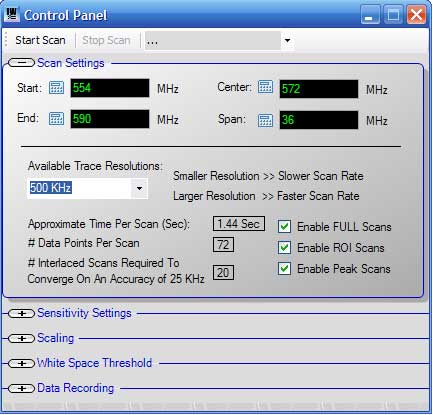 Control Panel / Sensitivity
The receiver must process a considerable variation of signals, ranging from very weak to very strong. This requires the sensitivity of the receiver to vary according to the incoming signal strength. The hardware Automatic Gain Control (AGC) acts upon the incoming analog signal. The AGC can be turned off by unchecking its CheckBox. The receiver gain must then be adjusted manually. This is done using the Intermediate Filter (IF) Gain control. Also, The RF Gain (i.e. radio frequency front-end gain of the receiver) can be adjusted using two controls, the Preamplifier and Attenuator. 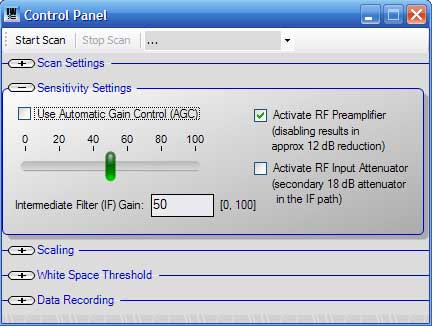 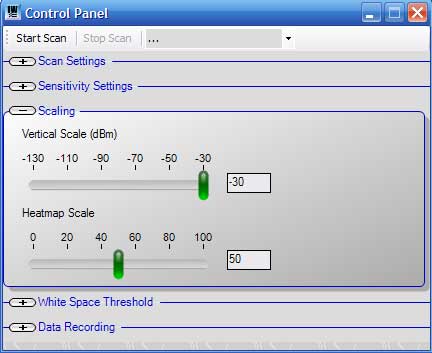 Control Panel / White Space Finder
The ‘White Space Threshold’ slider controls the threshold signal strength (in dBm) below which is considered ‘White Space’. When you adjust this control you’ll also see the horizontal, white line in the Spectrum Trace view move up and down accordingly. Along those frequency spans where the white line is solid and not interrupted by a peak, then this would be considered a White Space region. It is completely up to the user as to what is an appropriate threshold for this control — it depends greatly on the environment you are working in and what level of signal transmissions you feel can be safely ignored. The user can input the open space required and the spacing between adjacent transmitter locations. 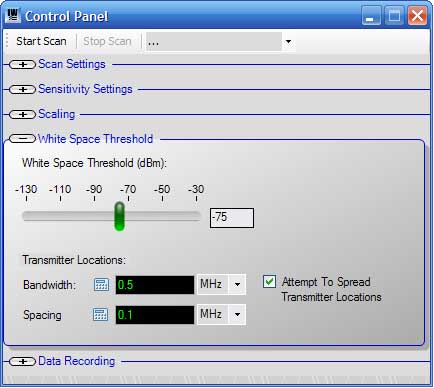 Control Panel / Data Recording
The Data Recording panel features a simple, yet powerful, Data Recorder. Recorded data can be reloaded into the software for later review and analysis. 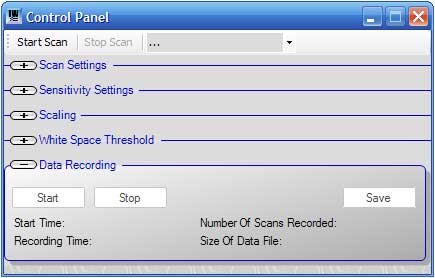