Rational Waves provides an inexpensive -- $79 USD -- solution for a variety of different RF applications. When you consider that it supports the most common, low-cost RF analyzers then it is fair to say nothing else in the RF diagnostic market even closely compares.

As a Windows application, Rational Waves runs natively on the Windows operating system (e.g. Windows 10). In addition, it can be used on a Mac when hosted within a VM (virtual machine) such as Parallels Desktop, VMware Fusion or Virtual Box. Here is a link that explains more about Rational Wave's MacOS support.

The table below lists some of Rational Waves' features:

Documentation for Rational Waves can be found here. 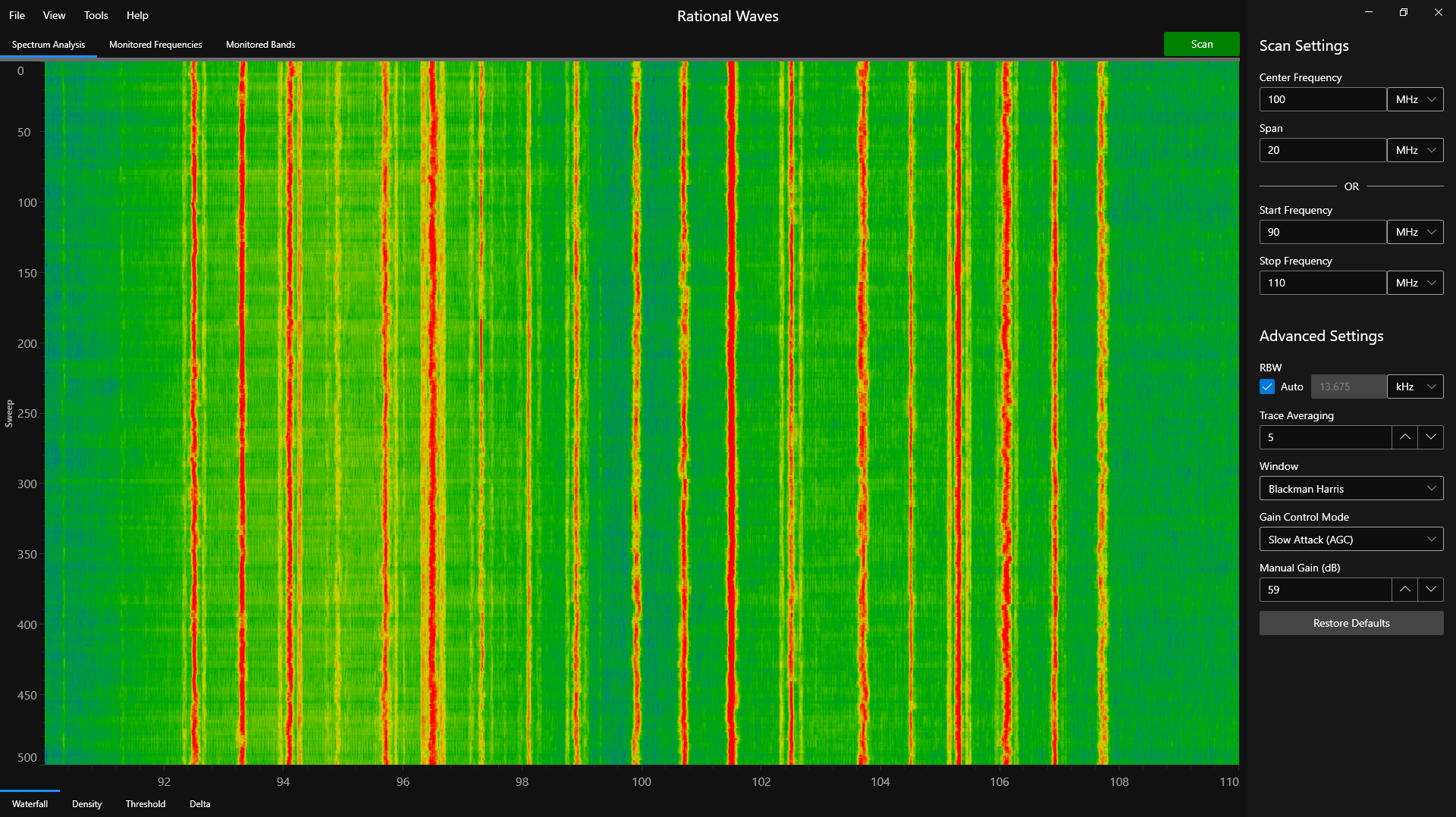 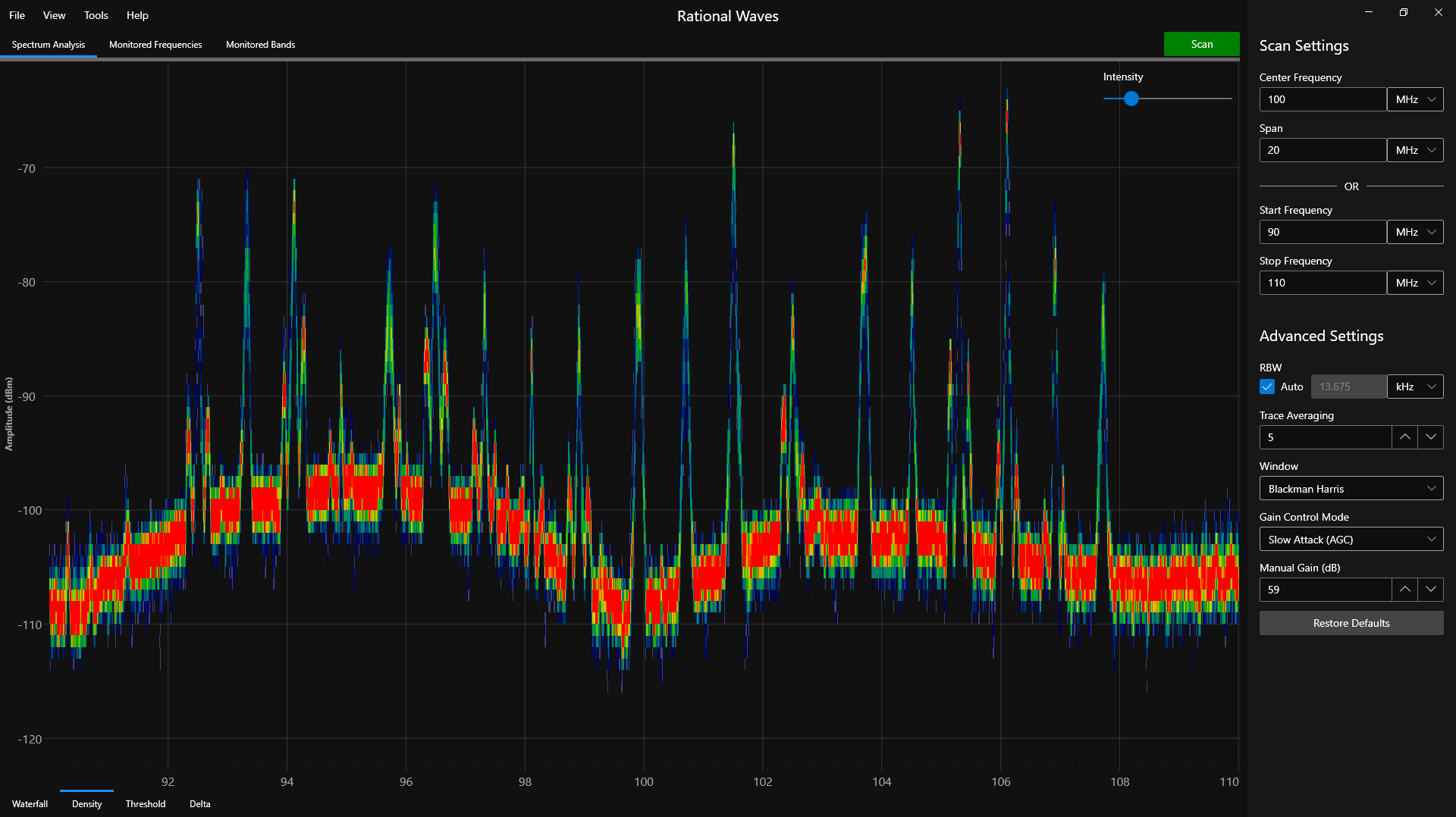 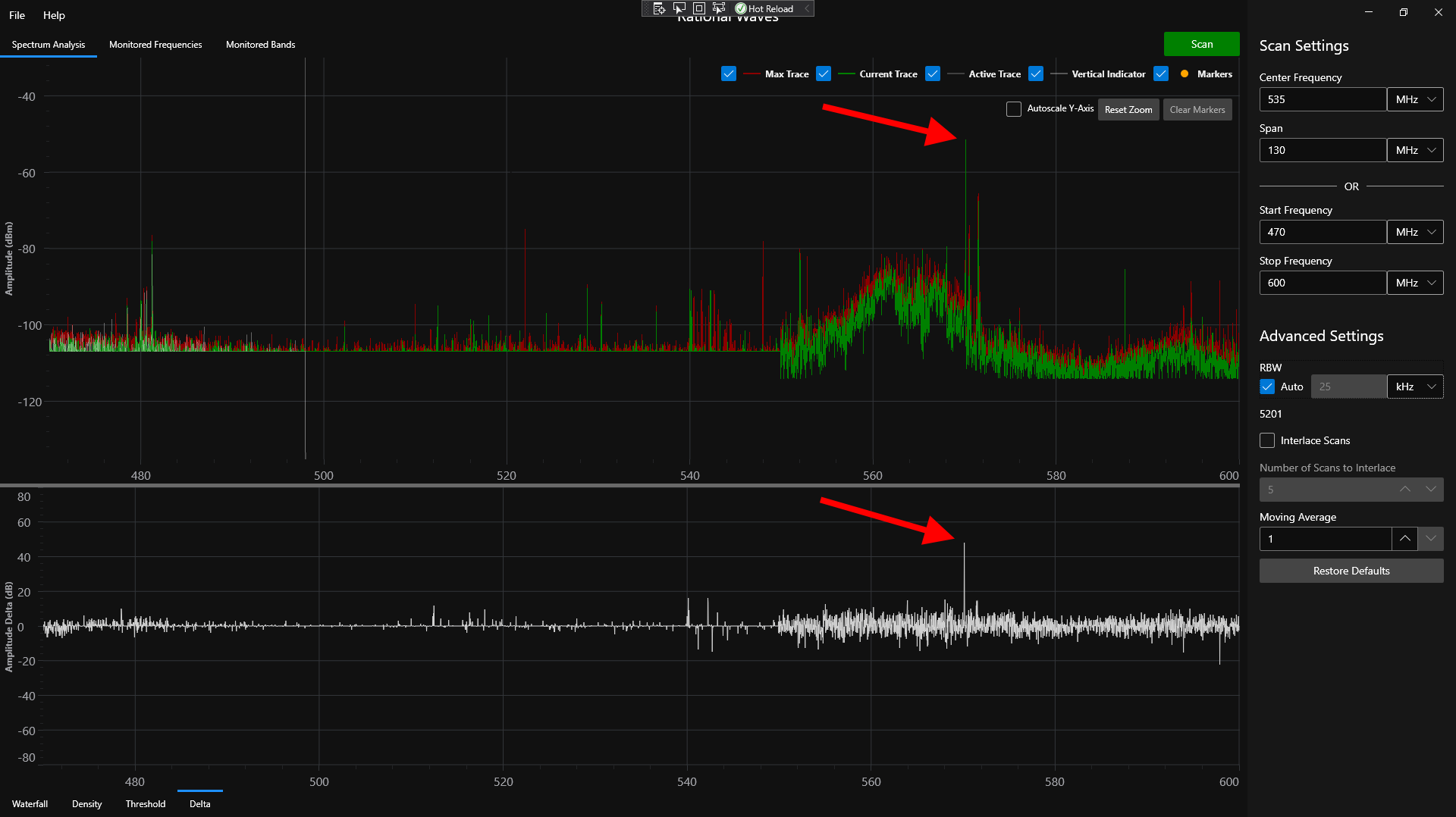 The 'Threshold Trace' view highlights those frequencies whose signal strength exceeds a user-defined threshold. This feature is especially useful for visually emphasizing strong signals (and deemphasizing weak ones), where the user gets to define 'strong' and 'weak' according to where they set the threshold.

'Monitored Frequencies' mode allows you to monitor specific frequencies. For example, in the setting of a live performance where it is important to monitor the channels that have been assigned to wireless audio devices, this feature can be used to ensure those channels are not being impacted by other sources of RF transmissions. Alternatively, if there are wireless devices that transmit at specific frequencies and you wish to monitor their transmissions, then this mode can be used to verify they are currently operating. 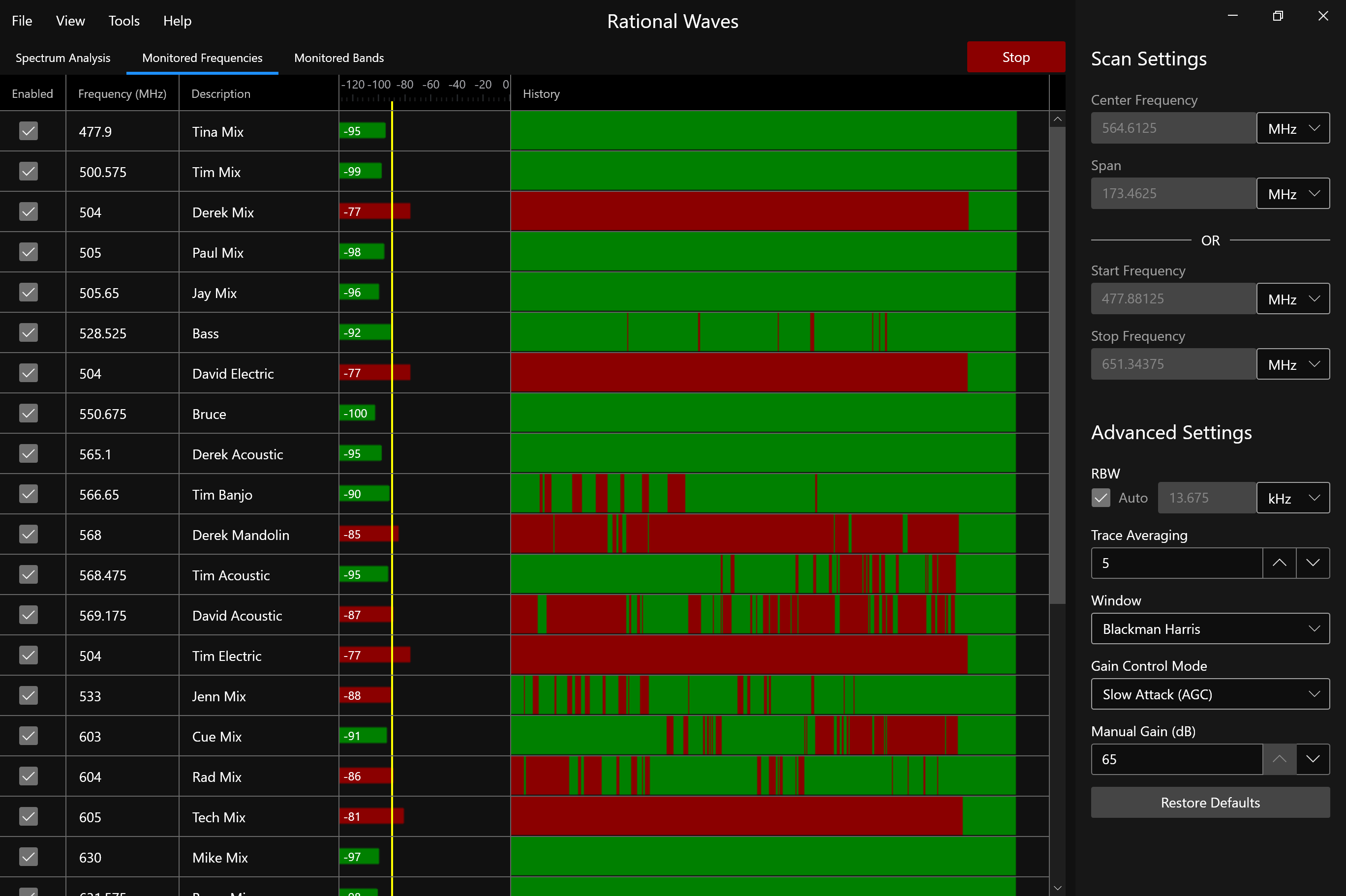 'Monitored Bands' mode allows you to monitor specific frequency bands. For example, in a cell-phone free area, this feature can be used to monitor the frequency bands used by cell phones for the purpose of detecting prohibited transmissions. 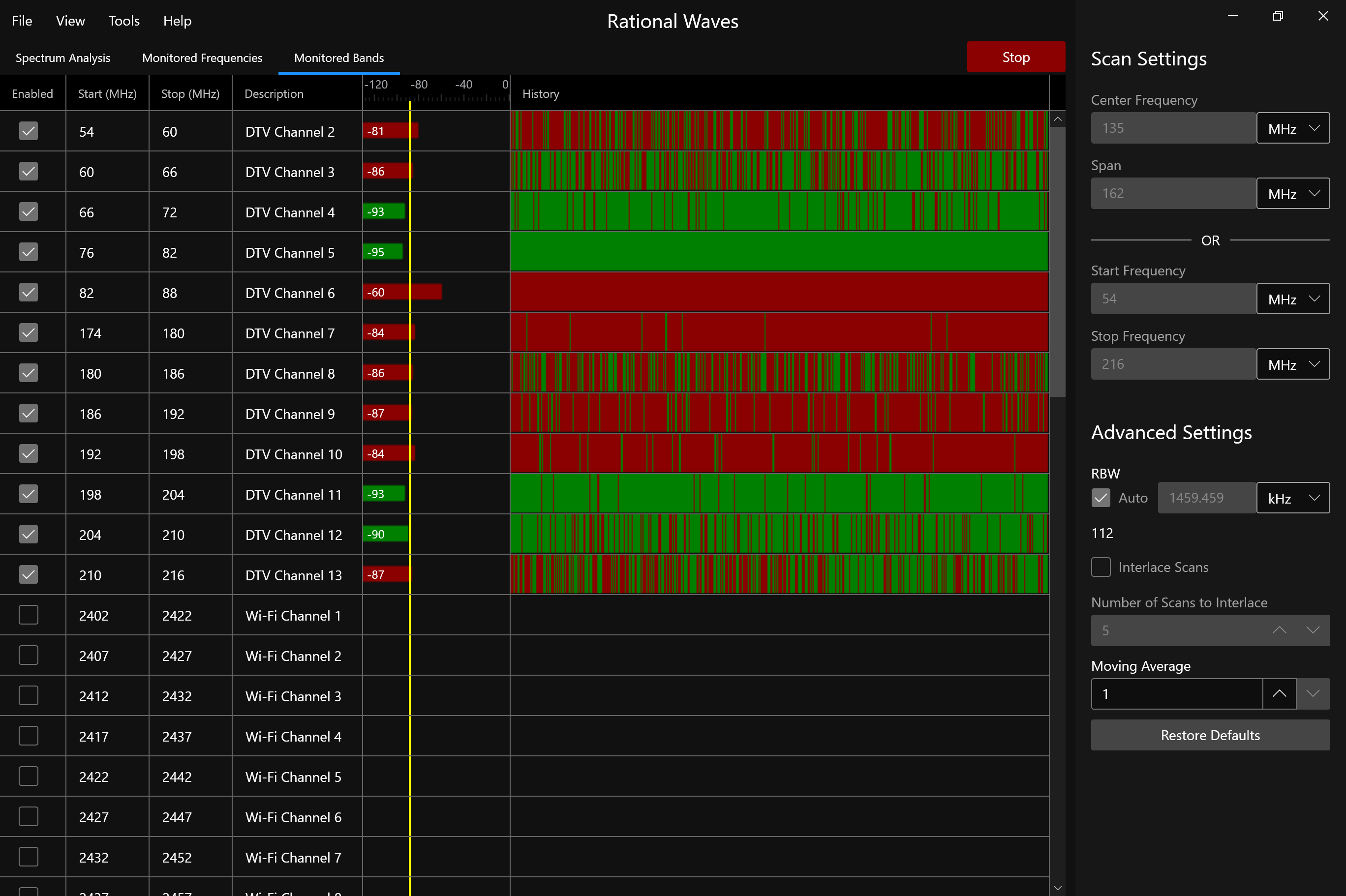